A public project by Stefan Brüggemann


Featuring a text by
Jesús Silva-Herzog Márquez
Stefan Brüggemann's work is a powerful tool to mediate with reality from the point of view of contemporary society. TRUTH / LIE interacts with immediate global events, but reverberates with universal notions of demagogy and control.

We are proud to present this public project within the context of a cardinal political border as a statement about the power of words and perception.

- Mau Galguera
I. (no subject)
TRUTH is a red, white, and blue neon sign spelling the word 'lie'.

LIE is a red, white, and blue neon sign spelling the word 'truth'.


Brüggemann’s work addresses a world in which the distinction between signal and noise has collapsed: in his words, 'I feel I am at the traffic lights but all of the lights are shining'. As we move further into the information age, the mass reproduction of words and images is eroding language and fracturing objectivity.

This public art installation intervenes in a particular frontier landscape offering a discreet reminder of the crafted misinformation that we navigate every day. This wry intervention, occupying a billboard space, invites the viewer to look up and disbelieve the message being sent.

The choice of presenting the work at the 'Tunnel House', a building located in Tijuana at the exact border between Mexico and the United States of America, contributes to the semantic border both words create and confronts it to a political border built through decades of historical conflicts, collaborations and negotiations.

Just as the colours of the work can be read as a local signifier in one place and an outside signifier in another, this work acts as a question mark that can be added to any social context and pose a poignant challenge to the orthodoxies of that space. 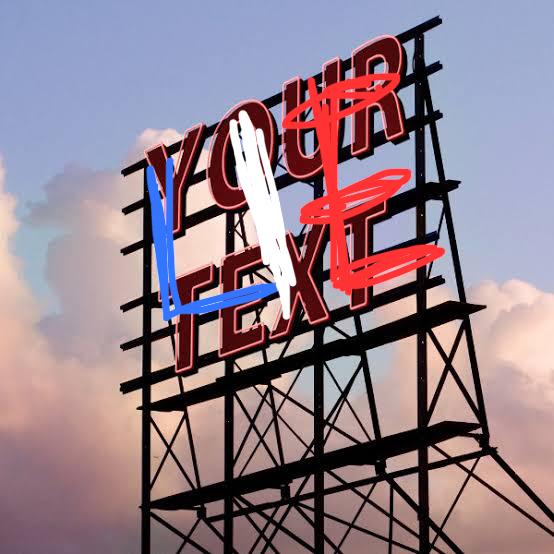 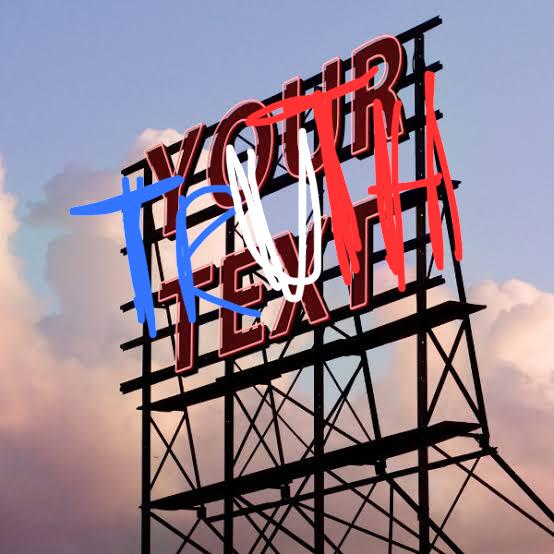 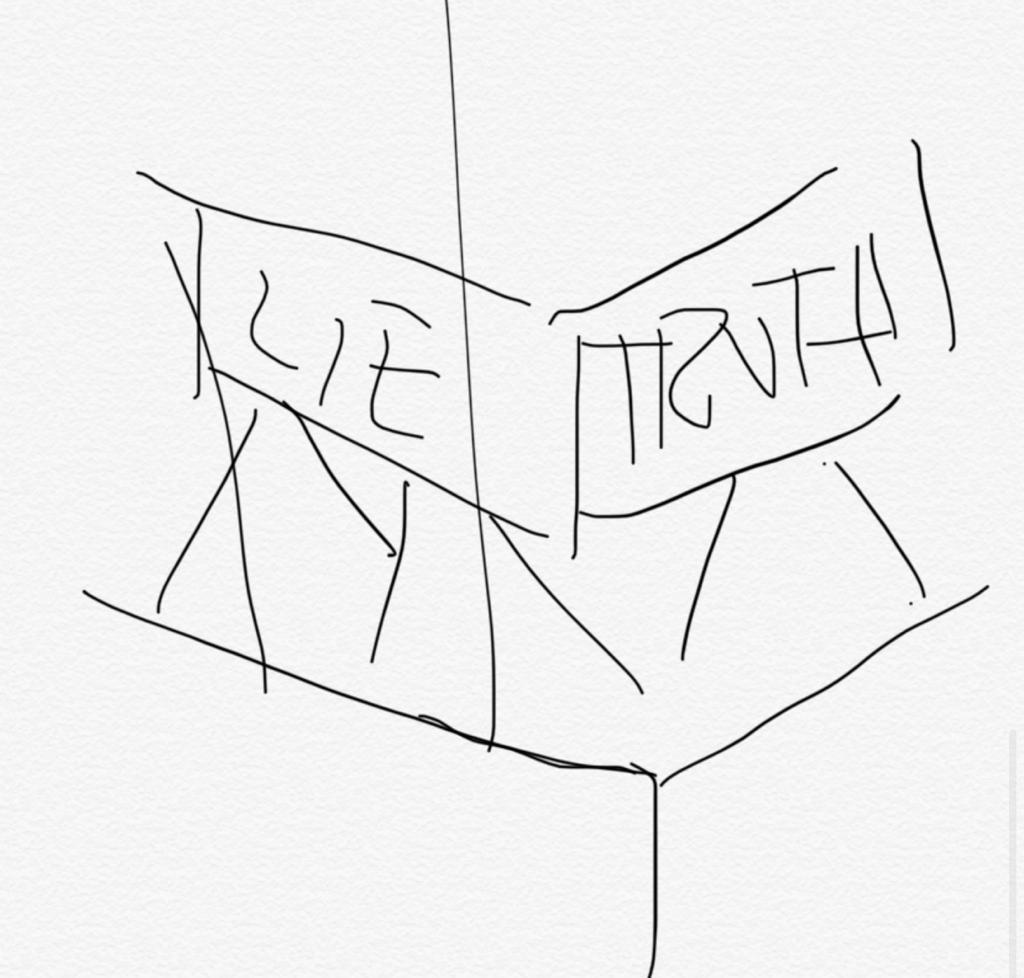 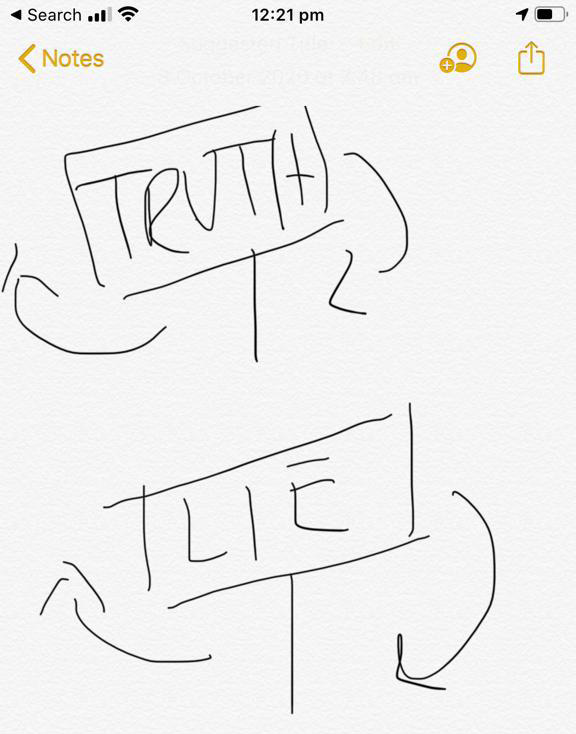 II. La casa del túnel, Tijuana, BC, México
The Tunnel House is a former illegal underground connection between Mexico and USA that is said to have been used for the trafficking of  drugs and weapons by the cartels. It stands exactly at the physical border between these two countries, maintaining a symbolic position in the local community due to its history and context. 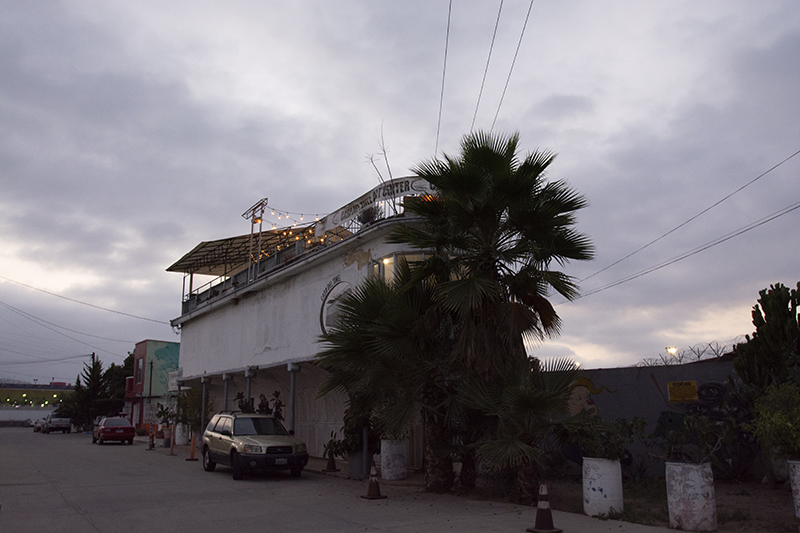 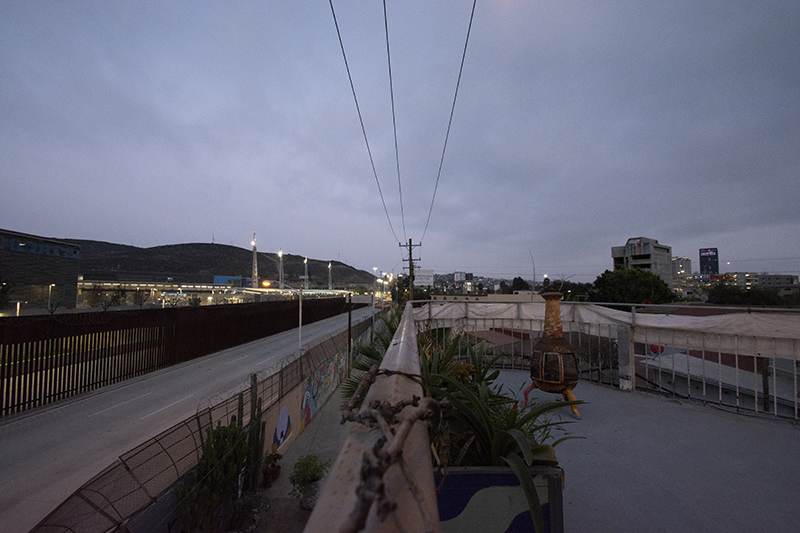 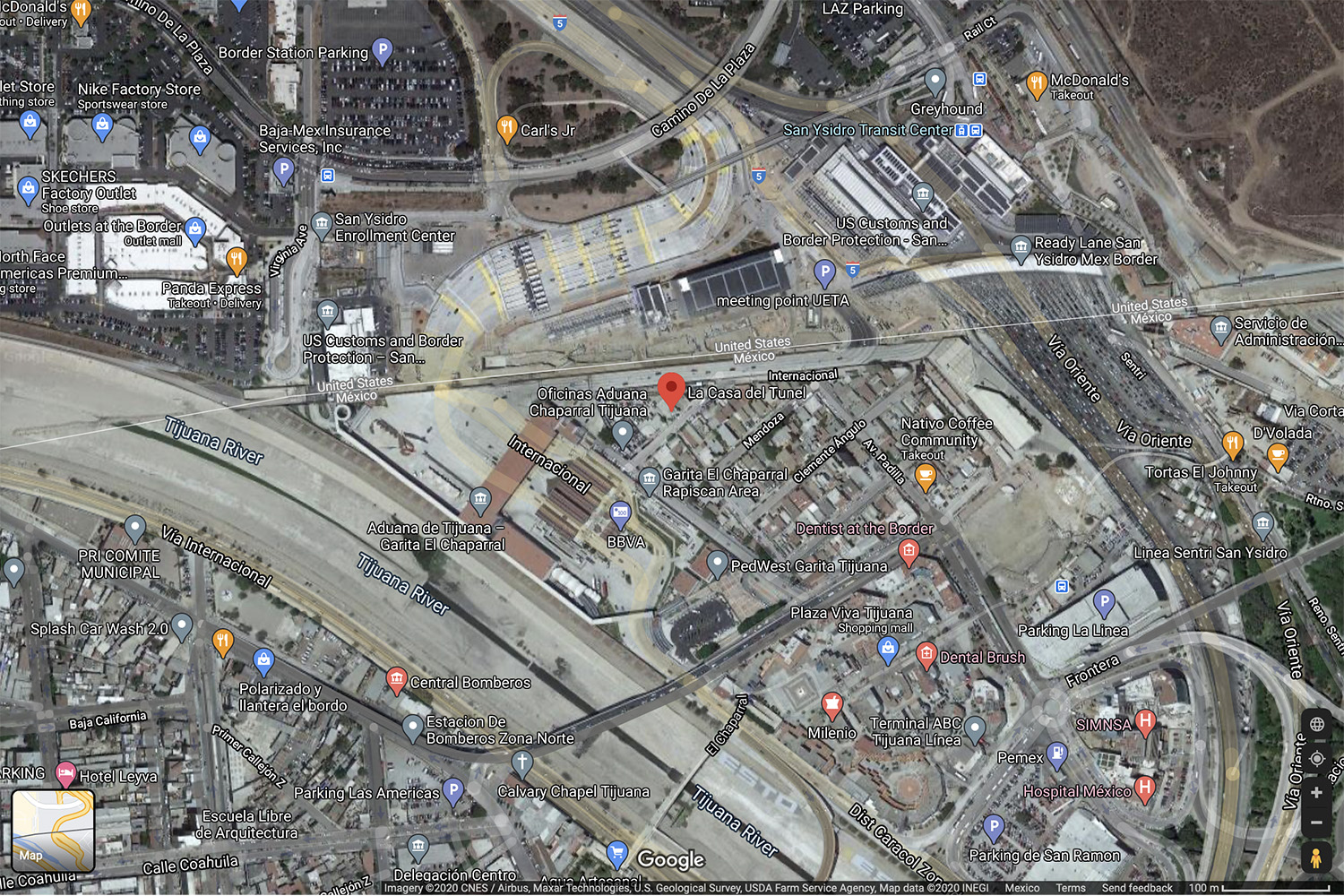 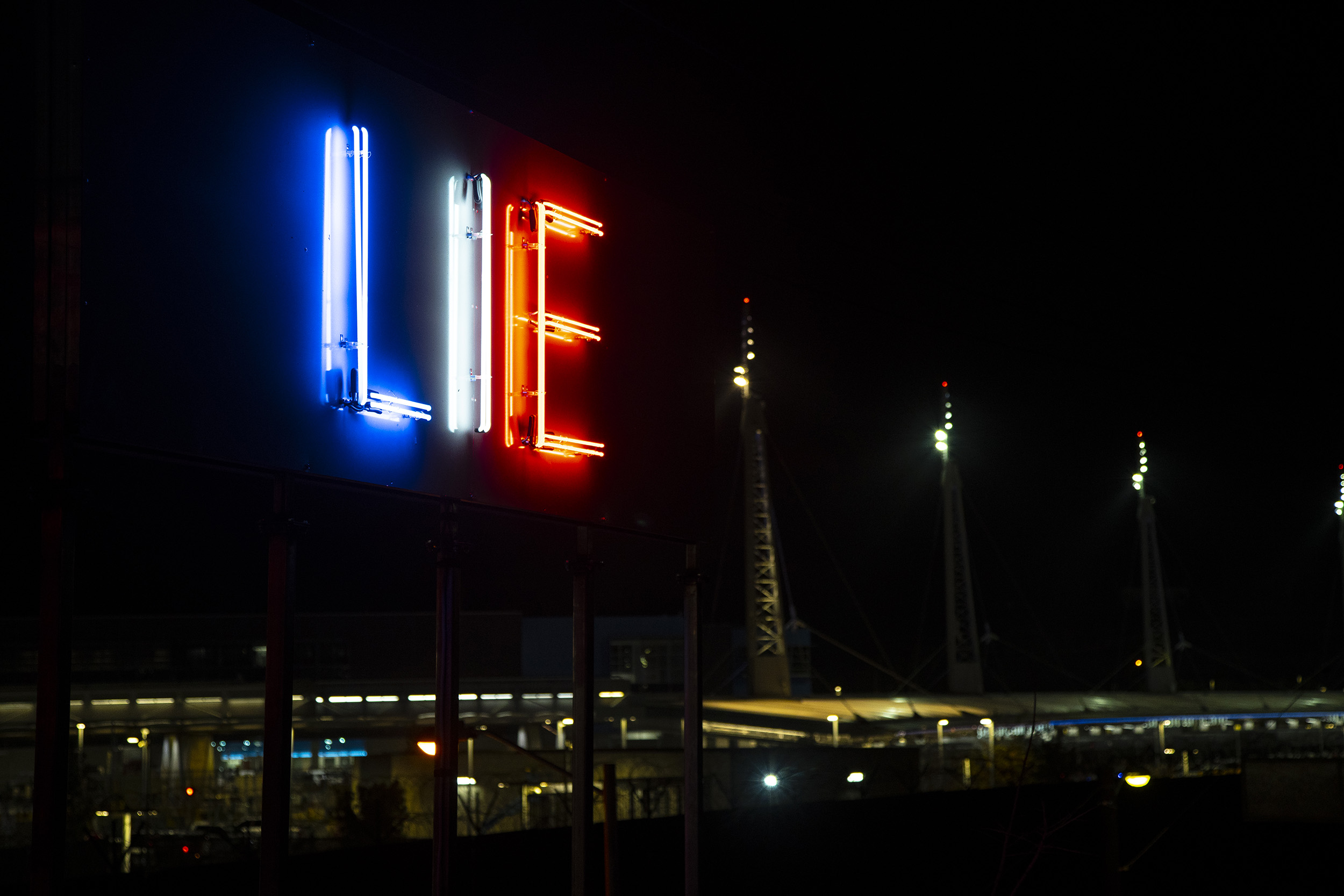 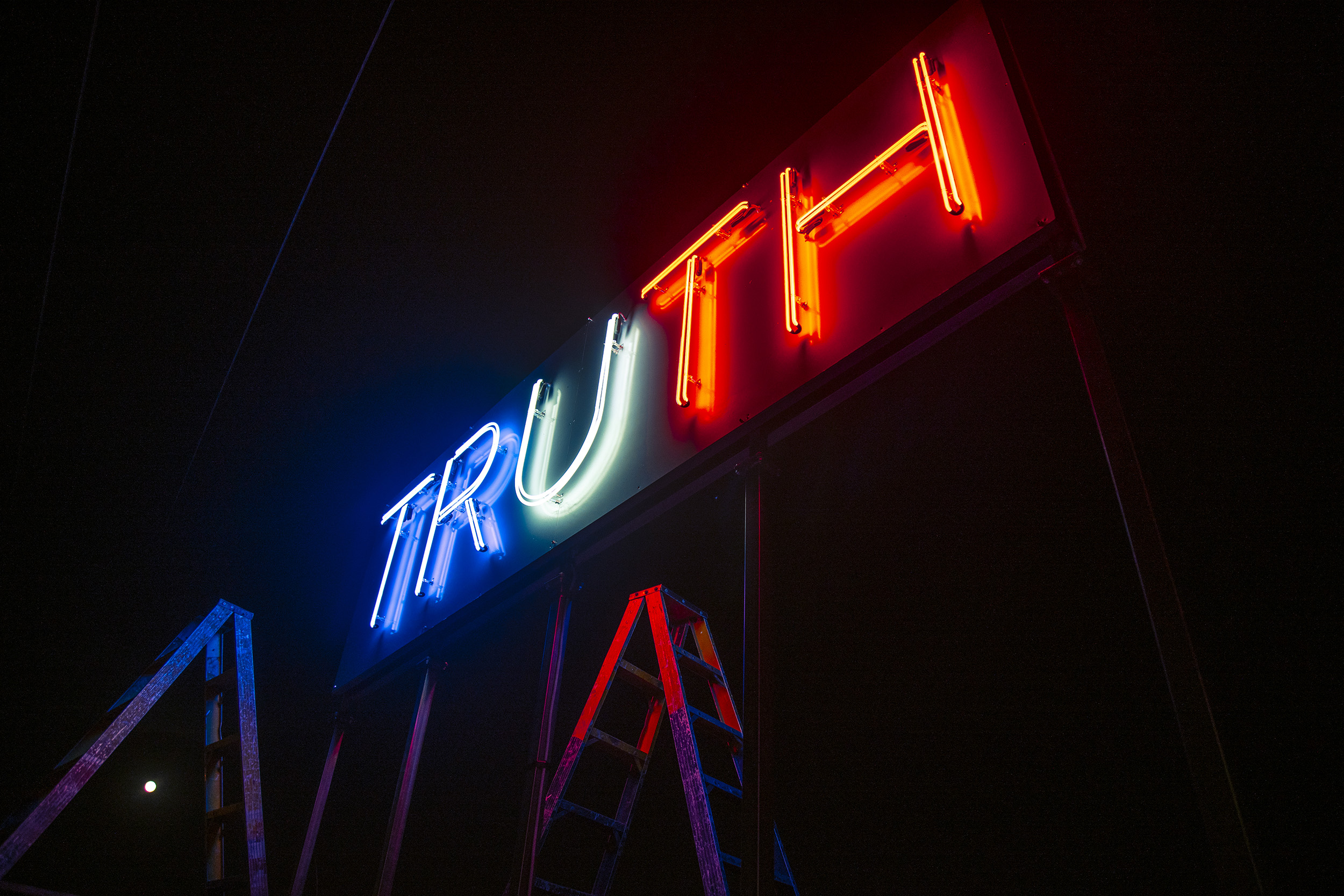 III. November 3d, 2020
POLITICS.
When thinking about Stefan Brüggemann’s plays with language––neons, graffiti, stencils, dictionary entries––I foretell the physiognomy of an unfathomable language. Butchering of truth, mutilation of sense. The word is dismembered. The superimposed layers of the voice provoke fascination, perplexity, suspicion. On a street in Folkestone, the artist garlands the frontage of a three-storey building with gold leaf and scribbles on the façade, “OK.” The sprayed ink drips, as does its meaning. Are those two letters acceptance, complaint, conformity, dissent? The simplest form of affirmation is turned into a sign of interrogation.

It was Octavio Paz who once spoke of language as a calcined tree. Words: bridges, yet also cages, wells. In one of his earliest poems, he already looked at the word as the principle of exactitude and confusion:

And, in his essays on politics, the poet warned that the first sign of corruption in a society is the gangrene of its language. Thus, he demanded that social critique were to begin with grammar and the reestablishment of meaning. Brüggemann’s interventions, art and criticism in the same gesture, carry that questioning to the gut, to the inscription itself of language. To palpate the deformed body of the word, to see the scintillating glow of the letters, to dig into the orography of sayings, to barely catch the last stretch of a parley. An archaeology of voices: the stately ruin of language.

“This work destroys itself when you stop looking at it, and it is restored once you look again.” As dictated by the work, the observer creates and protects the work, completes it, resurrects it. Caught by the piece, the observer twitches in the web of provocations. I see an echo of Mathias Goeritz in Stefan Brüggemann’s gold paintings, and soon I can tell that the contemplation of those canvases disturbs: their gold is no revelation. It conceals a message. It is not a device for elevation but a contraption showing that sense has been sepulchred in gleams. Here, the gold patina is no halo of gods, nor king’s crown, nor braggart’s tooth. It is humus. It is soil. It is time.

A leaf is planted; it has two sides. On the edge of that old, scarless wound, at the border of our North and their South, over the secret passageway that connects the underworlds of both Mexico and the United States, a two-syllable manifesto rises. Truth / Lie. Welcome signs to the present. Truth watches lie’s back. The neon buzzes, the intermittent glow of the gigantic sign illumines the source of our brokenness: one is inlaid in the other. Lie has not imposed itself. It has infiltrated itself into truth. We have neglected the structures that once separated deception from permissible speech. We have turned the deceiver and the thug into heroes of authenticity.

The piece in Tijuana insinuates motion: the onlooker understands the meanings to be in motion because they understand truth and lie as exchangeable tokens. Our contract with reality is a flip of the coin: Will it be heads or tails? Is it truth or lie? What does it matter? Who cares anymore?

Such indifference has been devastating. The worst part is not that lies are imposed upon truth but that the frontiers between them are now diluted. Brügemmann noted this down in prepa-ration for his intervention: 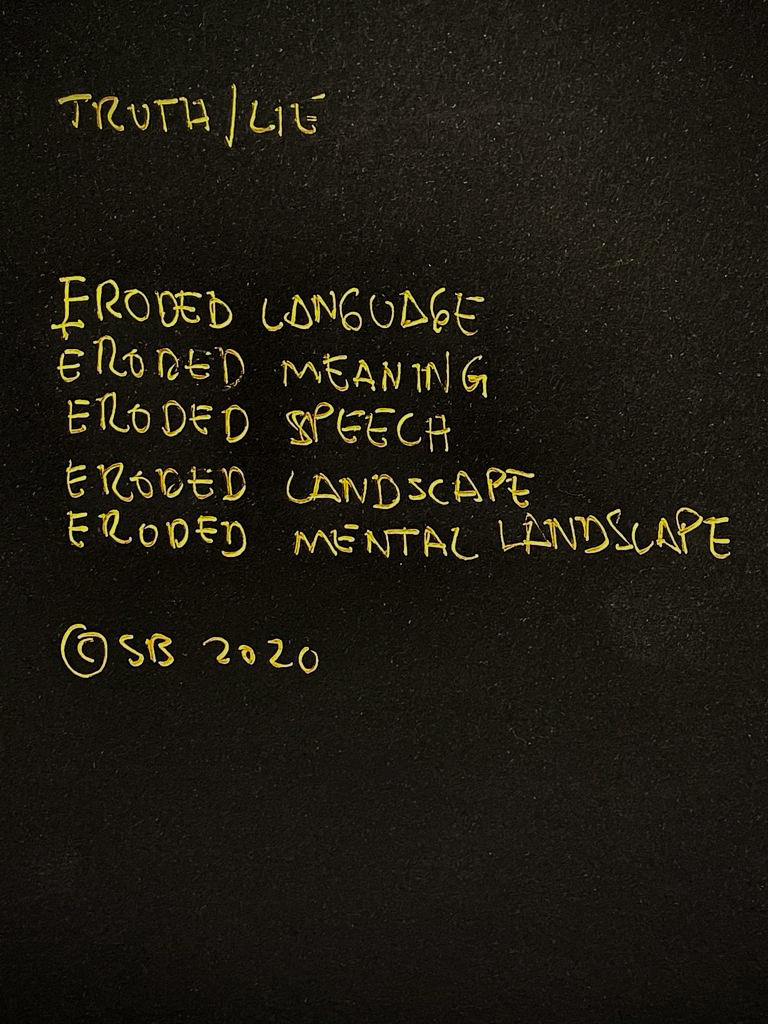 Eroded language
Eroded meaning
Eroded speech
Eroded landscape
Eroded mental landscape
‍
In the space of publicity, the power projects itself in fluorescent lines. Is it the merchant or the dictator who addresses us? Advertising campaigns for the autumn-winter collection: To seduce is to beguile. Hatred binds us. We are innocent, only they are guilty of everything. The blue, white, and red hues of the enormous letters capture the tribe’s alibis. Nationalism is the indifference to truth, wrote George Orwell. Why waste time looking for explanations for anything that happens if truth is has a capricious owner? Let’s relinquish upon him the judgement’s instructive. Nationalism is the seal that abolishes curiosity about difference, it is the proscription that doubt can be held as disloyal, it is the pride of farces, were they ours.

The double-spaced Arial font displayed on the neon sign––stiff, scrawny, frozen––is martial. Is this how it best shows itself? Instead of explorations, the letters in both words contain an order. Power, be it from the government or a private enterprise, imposes truth. Reality is not discovered but decreed. The duplicity of the neon sign is a complaint, a mockery, a game.

Your perception is your belief. 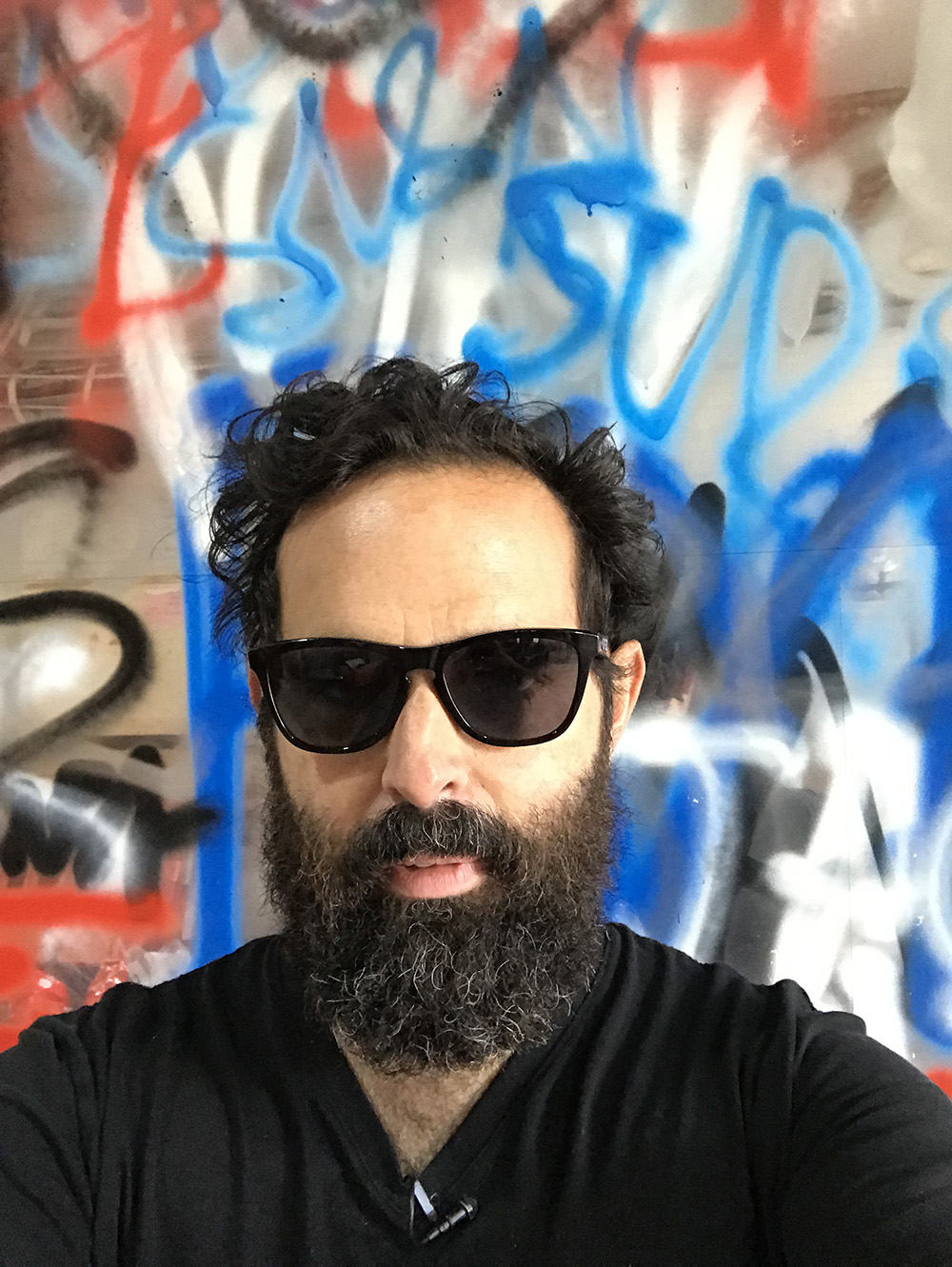 The artist’s oeuvre is characterized by an ironic conflation of Conceptualism and Minimalism. In this way, Brüggemann’s practice sits outside the canon of the con-ceptual artists practicing in the 1960s and 1970s, who sought dematerialisation and rejected the commercialisation of art. Instead his aesthetic is refined and luxurious, whilst maintaining a punk attitude.

The philosophy of language is a crucial tenet in Brüggemann’s practice, in which text functions as a fluid medium, utilized for both form and meaning; his choice of words typically provocative, acerbic and topical. Brüggemann’s masterful wordplay and conceptual rigour coalesce to create a bold and pertinent body of work focusing on themes of appropriation and displacement.

Brüggemann belongs to, and stands out from a generation of Mexican artists who dialogue with major historical and artistic global events, and has developed an extraordinarily relevant trajectory in Europe and the United States.

Organized by Pequod Co.
We would like to thank DESLAVE and specially Andrew Roberts for their kind support on this project.